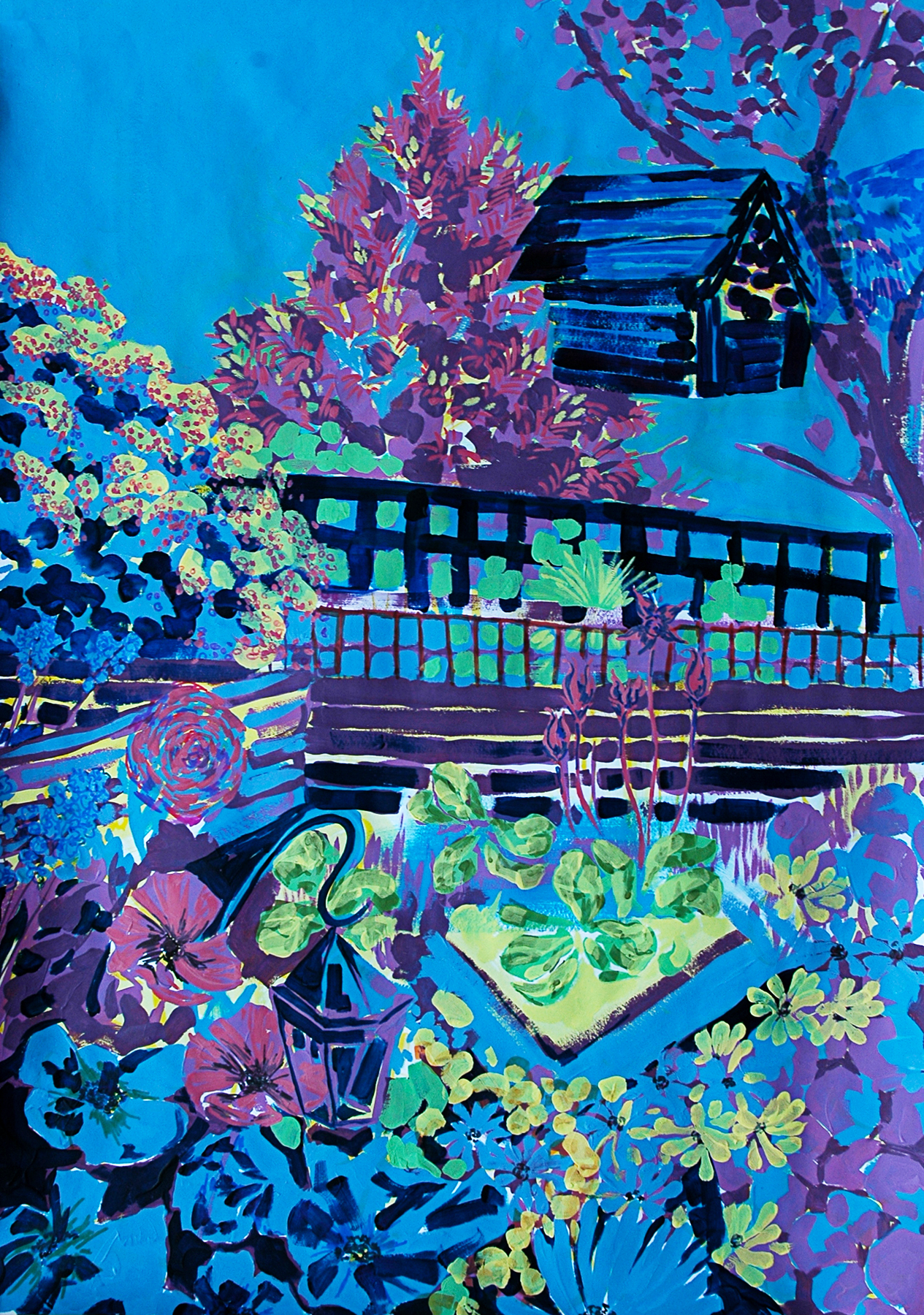 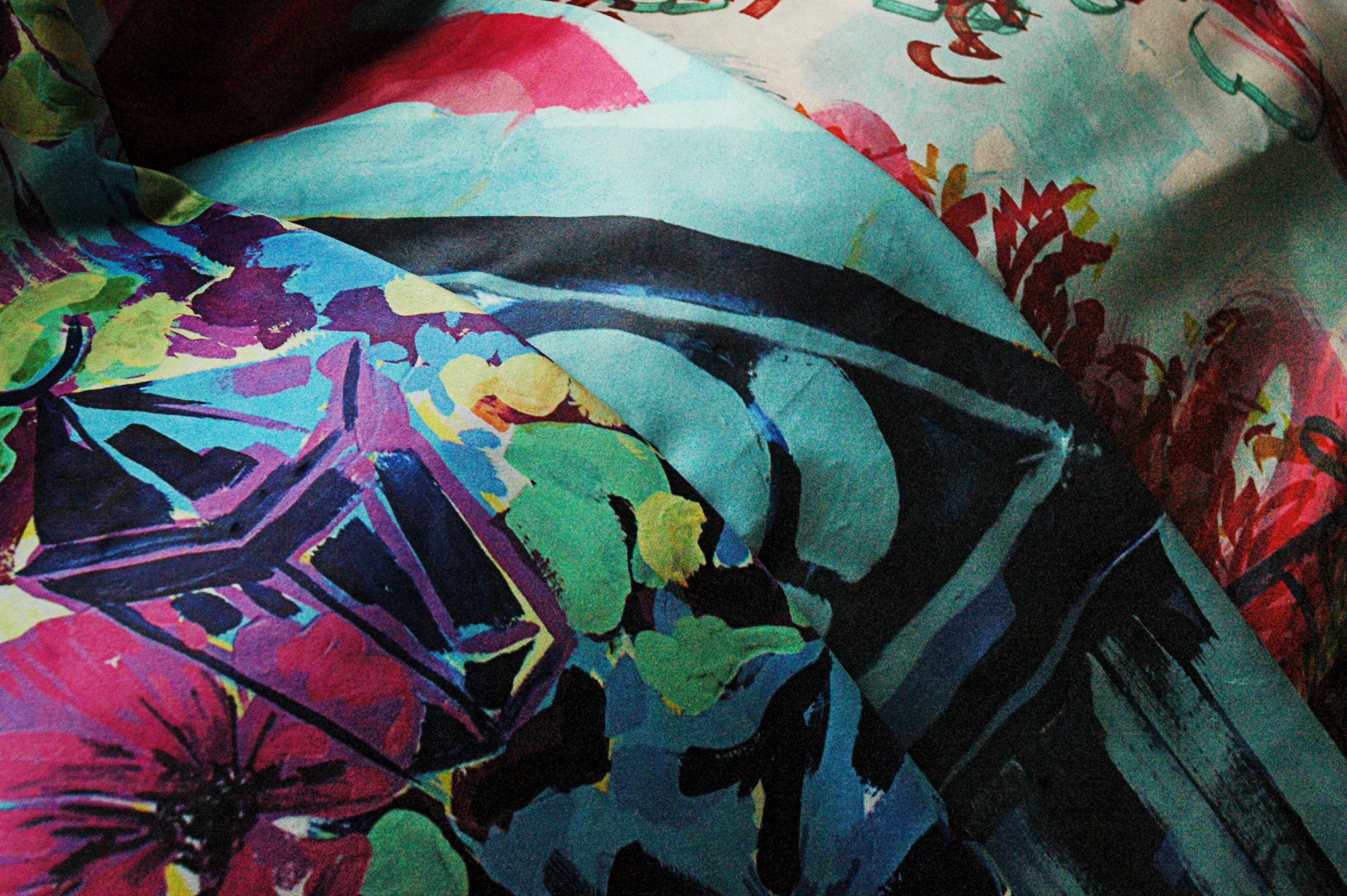 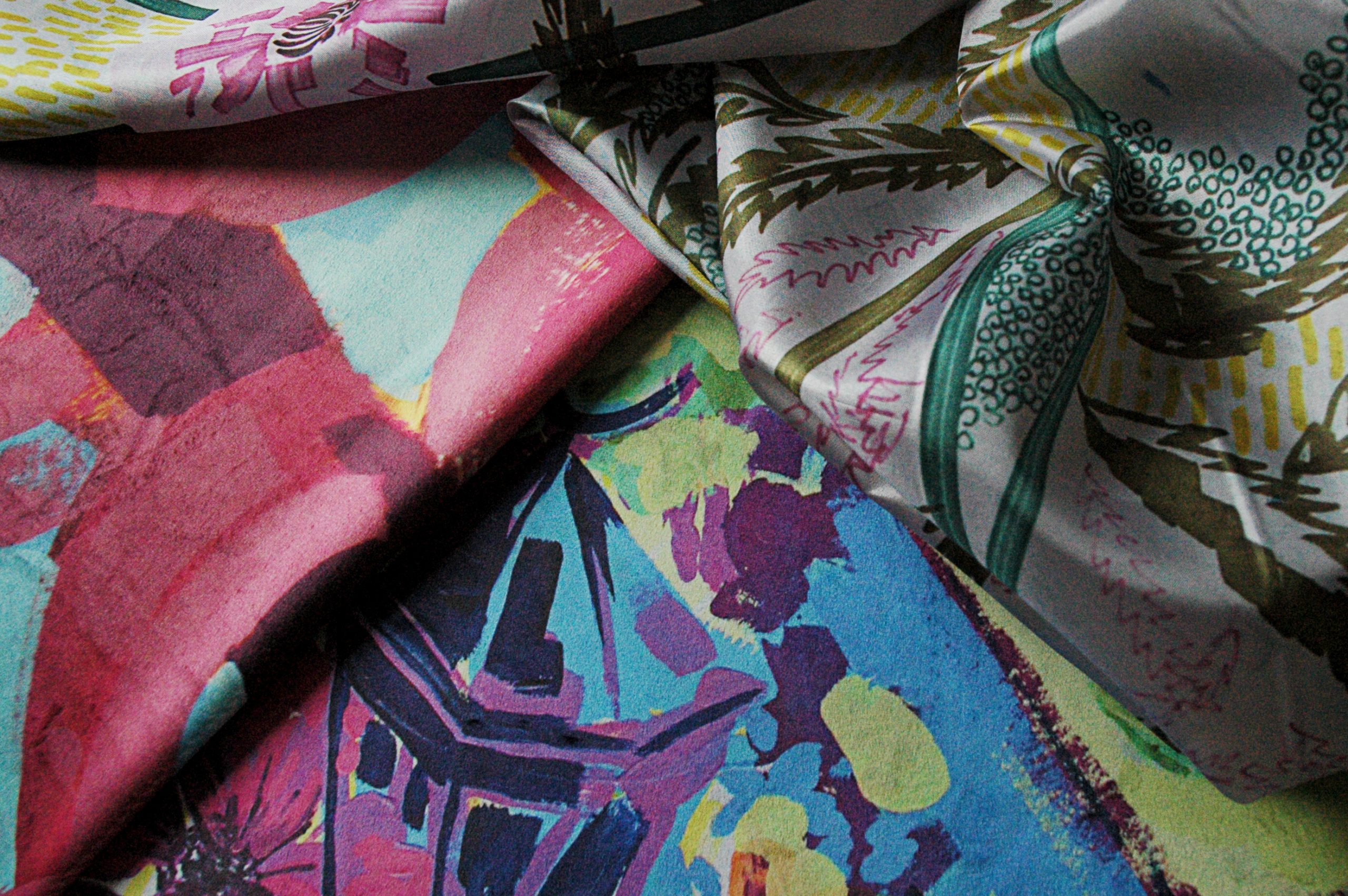 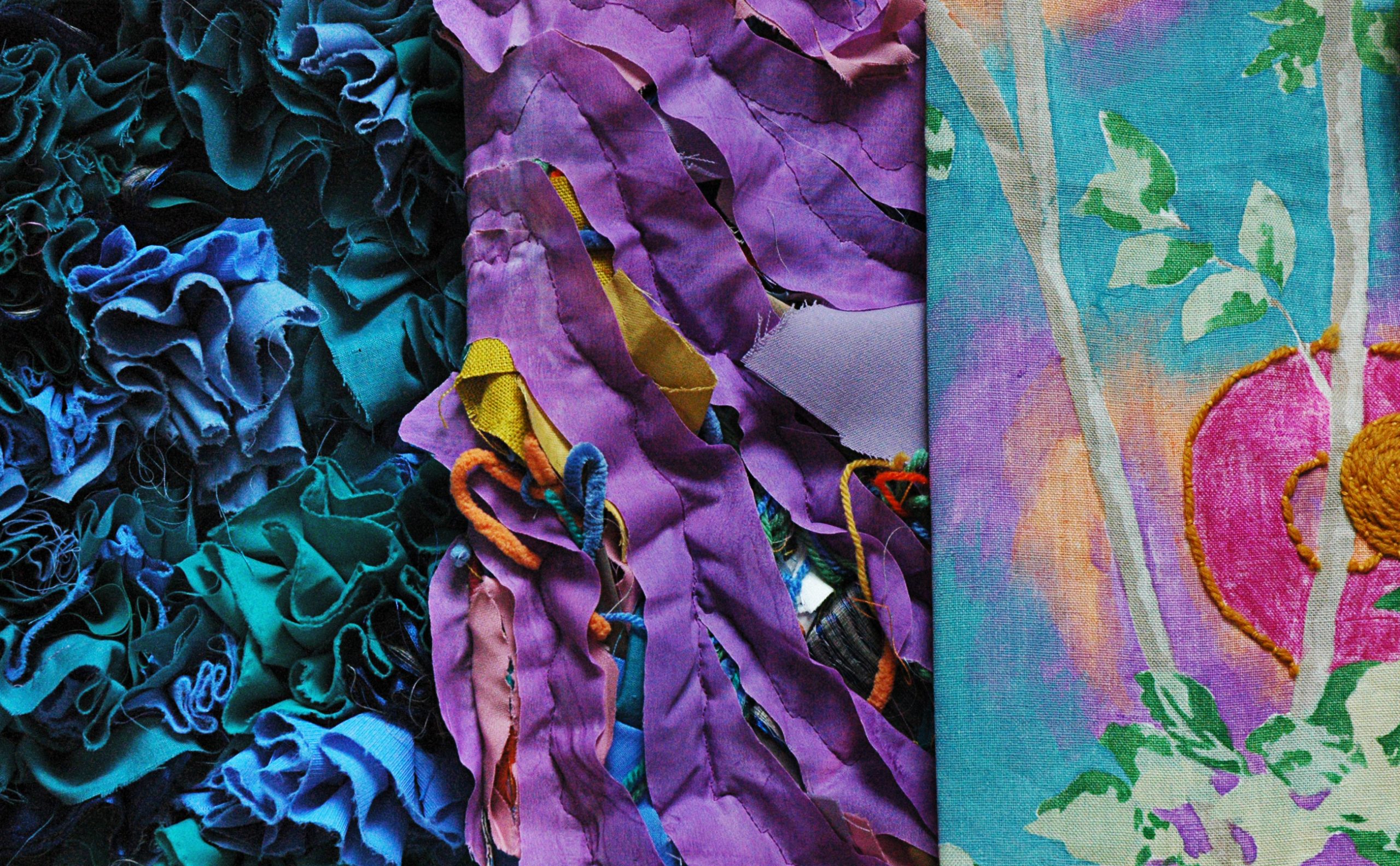 A collection of three final collection pieces, all of which composed of different soft feel recycled fabrics, hand-painted with colour changing inks that respond to sunlight and heat. 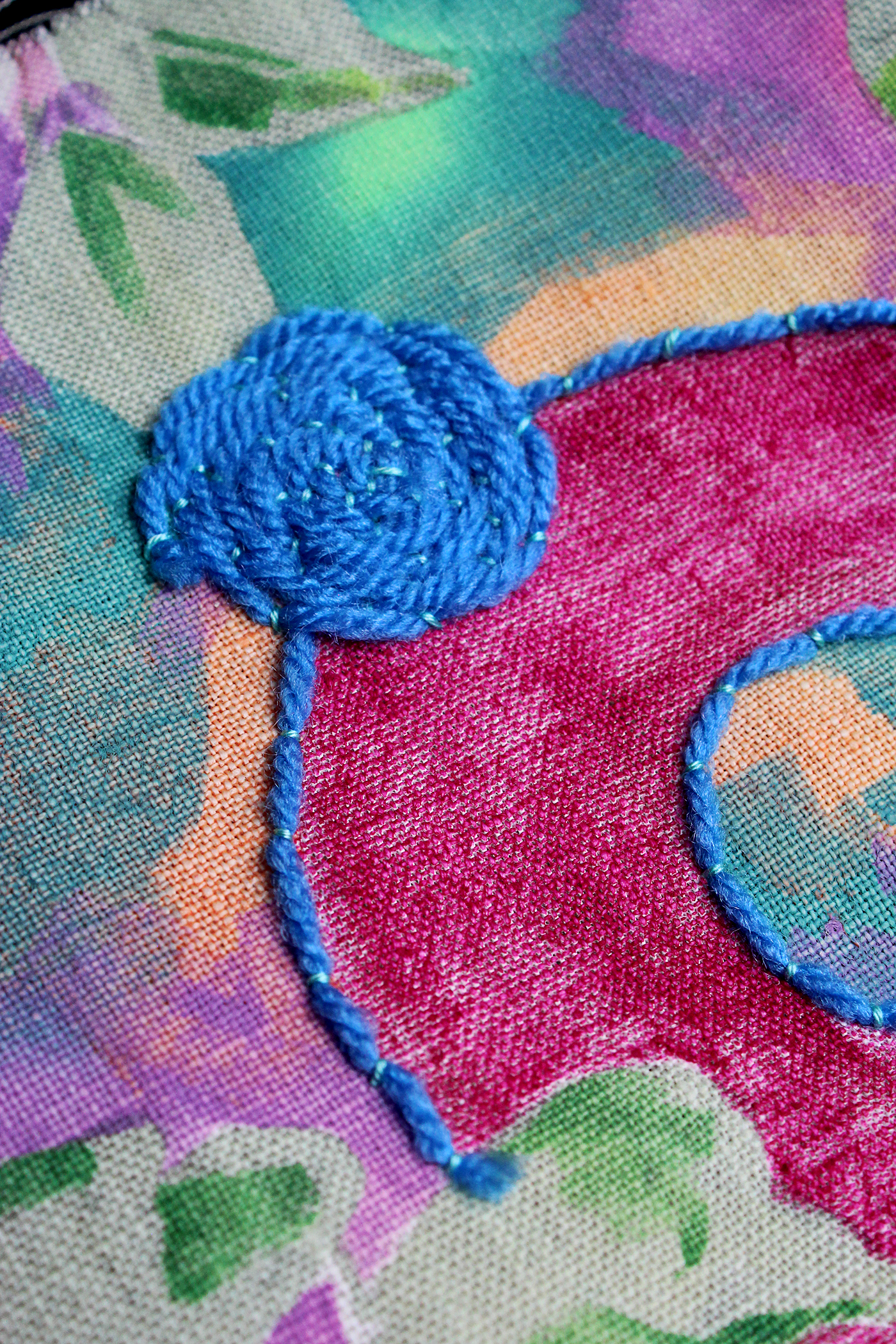 This sample is hand-painted with colour changing inks that react to sunlight and heat, adorned with wool couching. 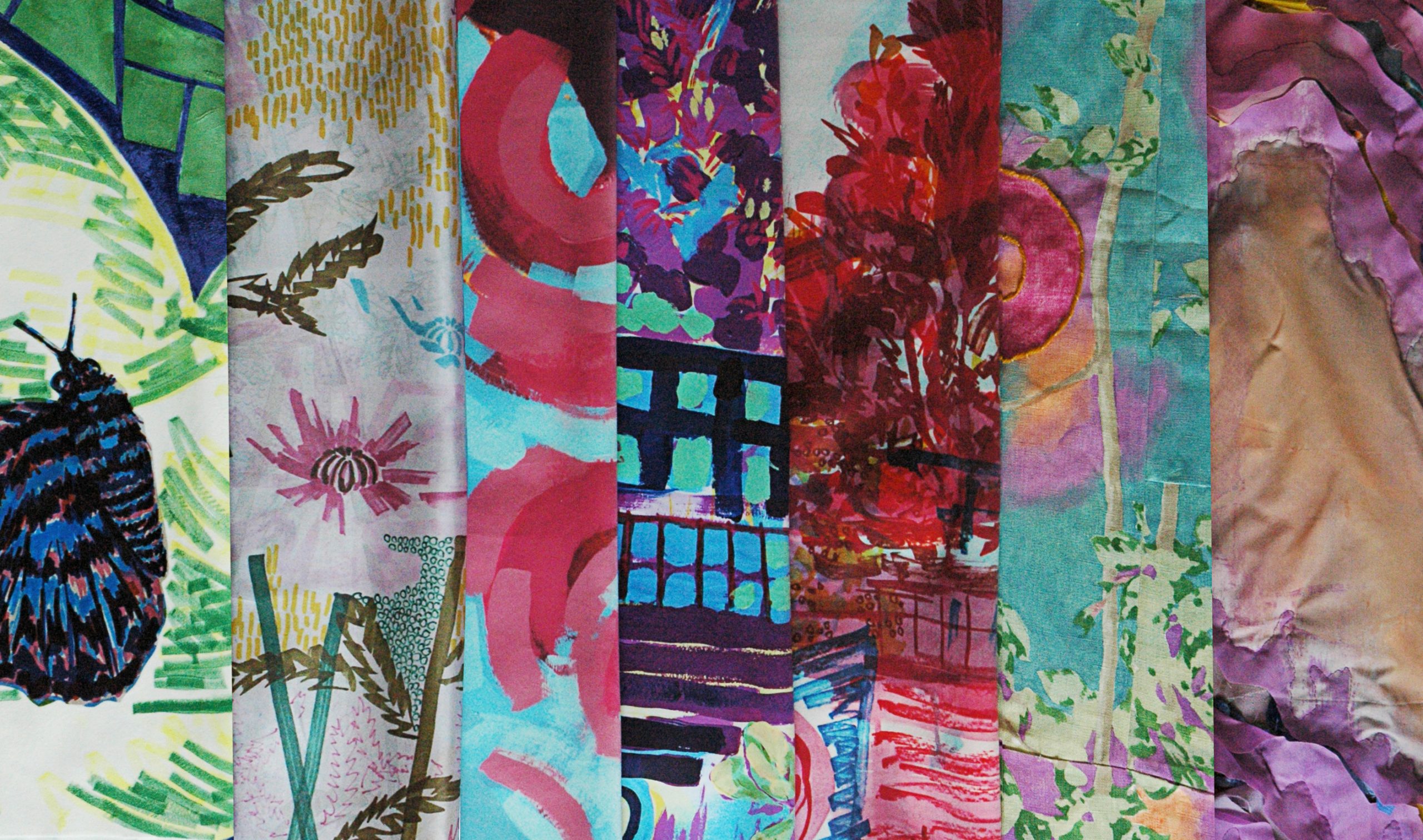 A collection of several final collection pieces, composed of prints, painted and embroidered pieces and colour changing fabric manipulation that responds to sunlight and heat, on a variety of soft feel fabrics. 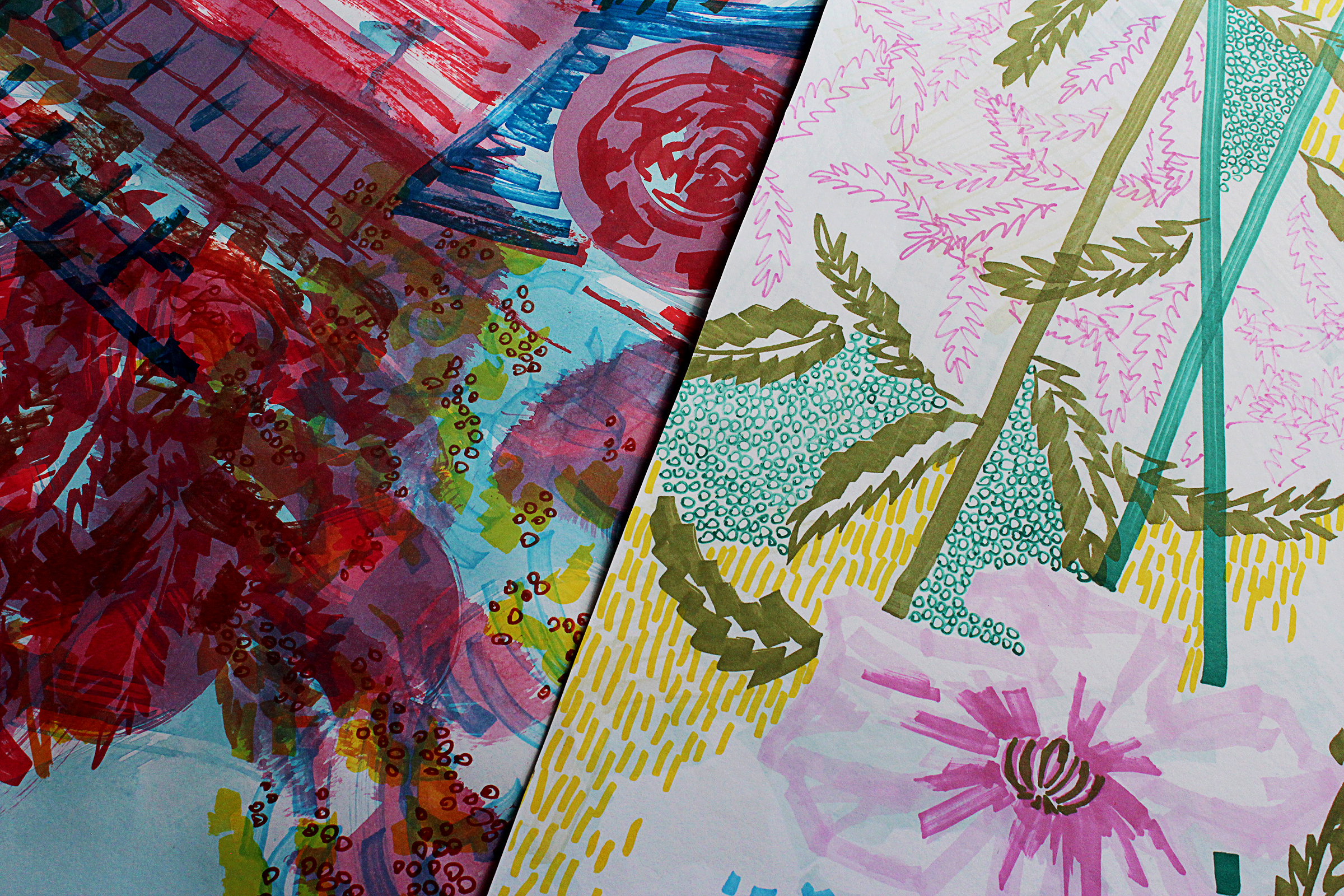 This image shows the two paper-based drawings that were converted into prints to be featured in the final fabric collection, both with self-composed using various components from first-hand photography in artists pen and diluted gouache paint. 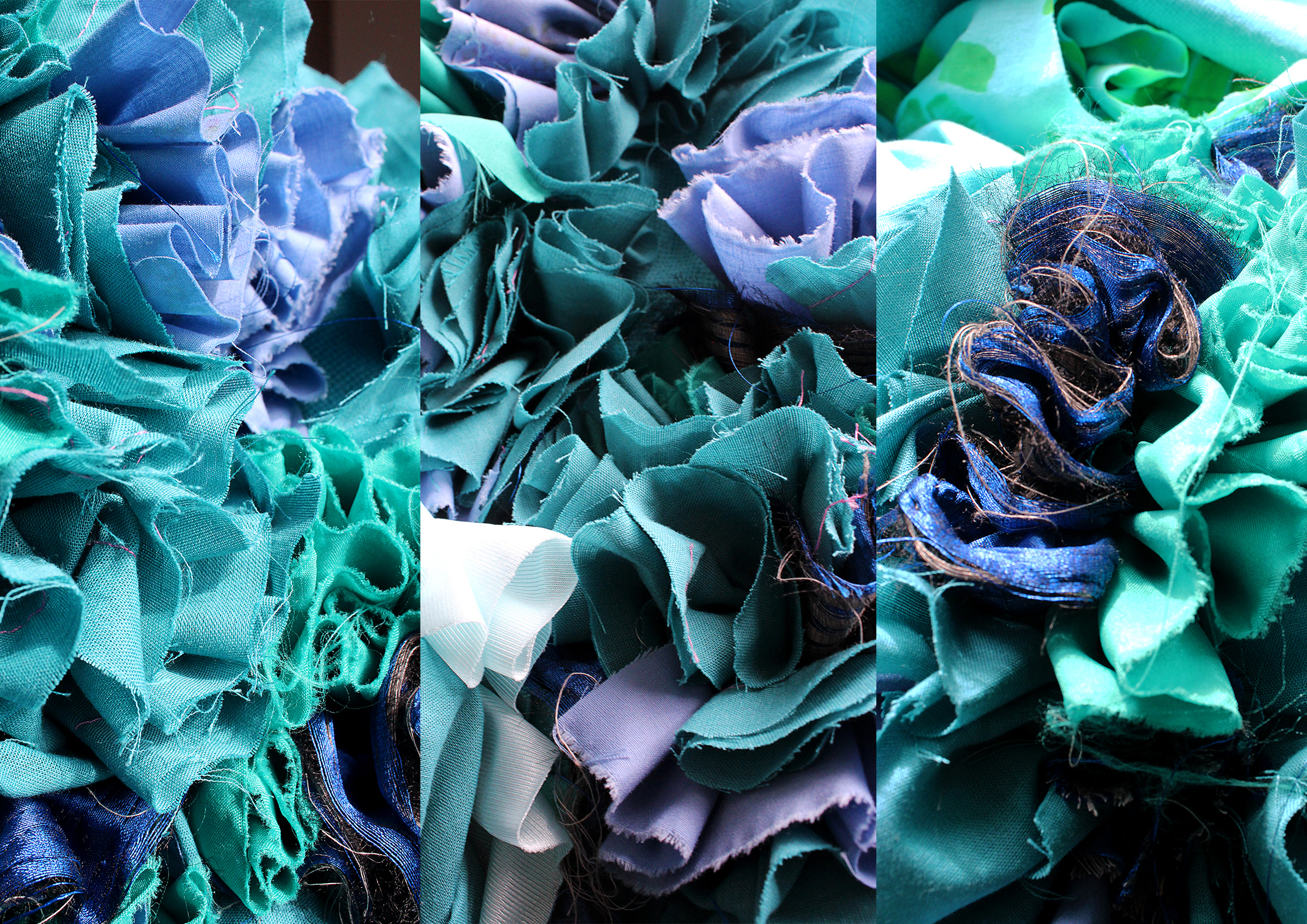 This piece was made from a collection of recycled materials and fibres, hand-gathered and ruffled, featuring colour changing elements that react to sunlight and heat.

A multi-sensory collection depicting a garden.

The project 'Tactile Surfaces: Playing in the Garden' is an extension of my project 'Love in Bloom' from our first semester of our final year. The way this project has been developed is in the way it derives narrative from the interaction I had with my grandmothers garden during the various lockdowns experienced during Covid-19.

Due to spending a large majority of my time with my grandmother and having to isolate for her safety, her garden was the main and often only outside space I and my family could interact with. Similarly to us all, when our lives were put on hold and we were required to stay inside, the nation experienced the after-effects of being so limited to the outside world and had to find new methods to communicate with friends and loved ones; this often had to be through technology, with strict limitations on meeting in outside spaces.

With an emphasis on the idea of 'interaction', the collection is made to communicate through a multi-sensory experience, specifically sight and touch. The theory behind Ronald Rael's Teeter-Tooter wall served as a great inspiration piece for the narrative of the project; the installation piece featuring bright pink seesaws built into a wall, allowing members of the public from either side of the wall to interact with one another. Similarly, in the textile collection produced for this project, it is meant to act as a direct user interaction product, using touch to change the appearance of the pieces ( as much of the collection is coloured with colour changing inks that react to heat ), vivid colours to stimulate the eye, various textures, soft surfaces and a variety of visual imagery.

The pieces are projections of first-hand photography done of my grandmothers garden, altered into highly saturated colours, inspired by the work of Fauvism and colour theory. The compositions were made through a large quantity of drawing and painting, as well as material experimentation. This sensory experience is meant to project the reality of parks and gardens becoming the only spaces that people could interact with; with an array of intimate connections for different people. For me, this collection reflects the closeness I had with my grandmother and the time I spent with her during the pandemic. She, unfortunately, passed away during the making of this collection, making it then become a way for me to become closer to her after she passed.

The collection that acts as artistic wall installations are meant to bring the outside world that we have been so cut off from into interior spaces, and whilst I am heart-broken at my grandmothers passing, this collection has become a celebration of her life, her passions and the time we had with her during what was a globally difficult past two years.

Tactile Surfaces: Playing in the Garden

Strand on the Green Junior School – May 2016 & May 2017
Two-Week long Assistant in both the May’s of 2016/17. The Roles involved designing and hand-painting the backdrop for the school’s production of ‘Back to the Future” (2016) and ‘Greece” (2017), as well as assisting in the production of costumes and styling.

River Island – October 2017
Based in HR, assisting the fashion design team and fabric sourcing team. Responsibilities included organizing fabric sample documents, attending mill agent meetings and designing and crafting a garment for an upcoming vintage edit which was sold in store. This garment was also used in the advertising for River Islands official Instagram.