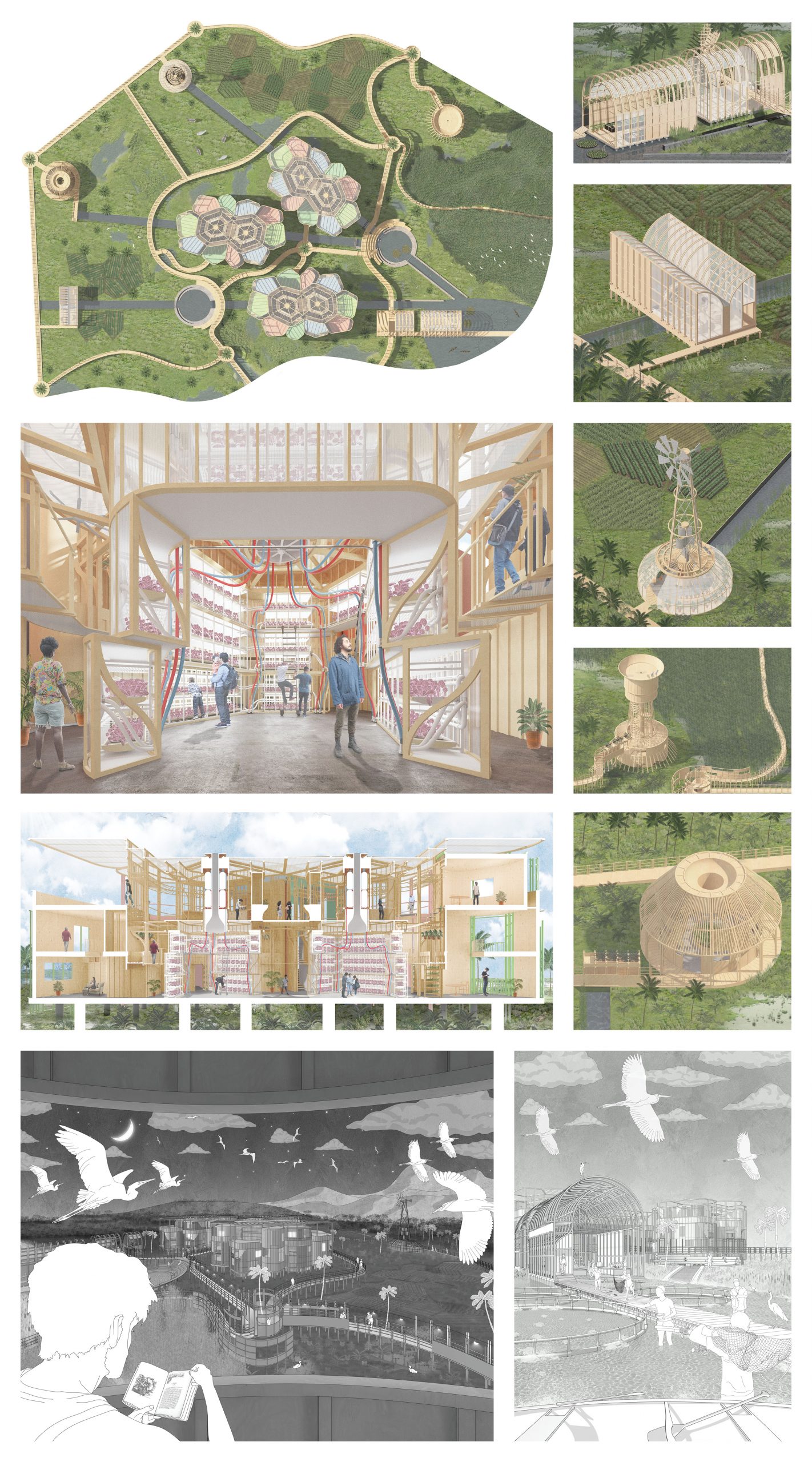 Return to the Carioca Backlands

Return to the Carioca Backlands is a project which explores horticultural futures to imagine future domesticities for a people now removed from the rurality of Rio’s once forested wetlands. Within this pocket utopia, meat-growing labs and a conceptual urban mosaic emerge as technologies through which to imagine new sustainable communities. The chosen site is on the brink of urbanization, still building to this day on its modernist foundations. Through the design of a housing scheme, which incorporates agricultures both old and new, the people of the Carioca are given a place to practice and preserve.

Largely inspired by the 1936 book ‘O Sertao Carioca’, this project recalls the bucolic studies of its author Magalhães Corrêa, creating a space for flora and fauna embedded in the metropolitan: an urban back land. A housing scheme is proposed alongside a living Ecomuseum which conserves the culture, ecology, and practice of the wetlands. The forms and function of these spaces are adapted from the drawings of Corrêa; they become iconographic structures, which rise from the wetlands as if sprung from a pop-up book of the carioca. The New Carioca Backlands form a kind of pocket-utopia, a scheme operationalized through a series of connecting pathways, water channels, and agricultural fields which navigate the wetland terrain. Side by side, the EcoMuseum, and residential communities foster a symbiotic relationship. In the heart of the urbanized metropolitan, the New Carioca Backlands emerge, a place which through horticulture of past and present, sustains a relationship with the beauty and rurality of its ecosystem. 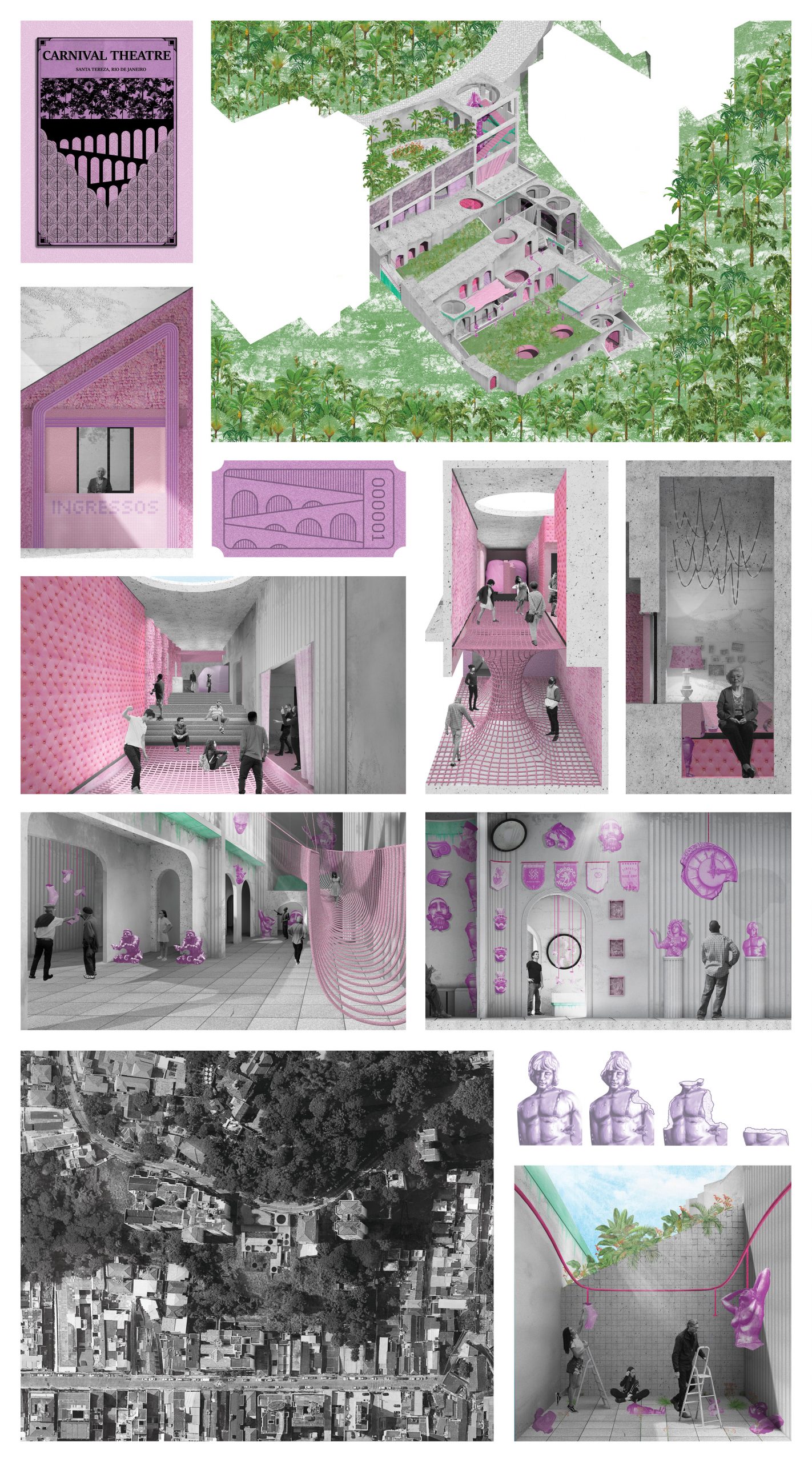 It is often said that it was not Rio that invented Carnival, but Carnival that invented Rio. Modern carnival evolved alongside Samba music in the 1910s, which was very much a movement dominated by the city’s poorest. Over time, the celebration has evolved, as floats, costumes and technologies have been integrated into the festival. This marked a change from not only celebration through the body's performance, but a celebration of the body, and the use of the body as a tool for story-telling.

Fundamentally, the origin of Brazilian Carnival is very much the concept of ‘pretending ’that socials conventions are turned upside down. The day is promoted as the ’one day' a year that Samba, hillsides, and lower classes can be celebrated. My project explores the design of a theatre, which aims to curate and explore the bodies of Carnival. It asks how we might evoke these artifacts, making visible a central aspect of Rio’s urban geography, its 'imagined' dimension. I ask the question, ‘What if architecture performed the agency of carnival?’ 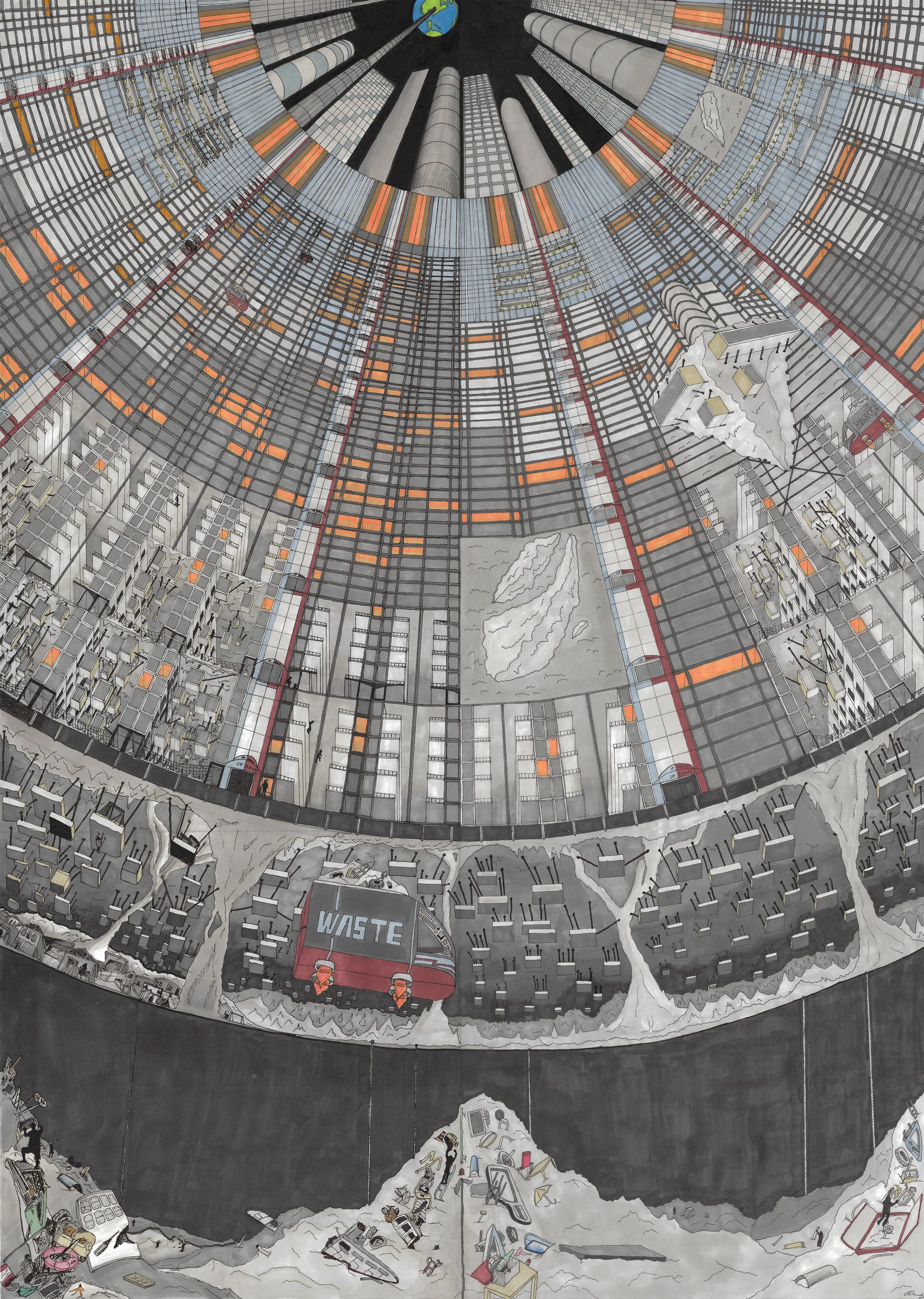 Lunar Colony explores the creation of a fictional space. The artwork is inspired by the Foundation novels, written by Isaac Asimov, and Artemis written by Andy Weir. As the population on earth reached critical levels the Moon would become a haven for those who wanted a change. However, limited available space resulted in above-ground property under the sole control of the upper classes. The underground storage units were transformed and adopted as slum-like housing, within the cities dumpsites. This image documents the conditions of life for the Moon’s poorest. 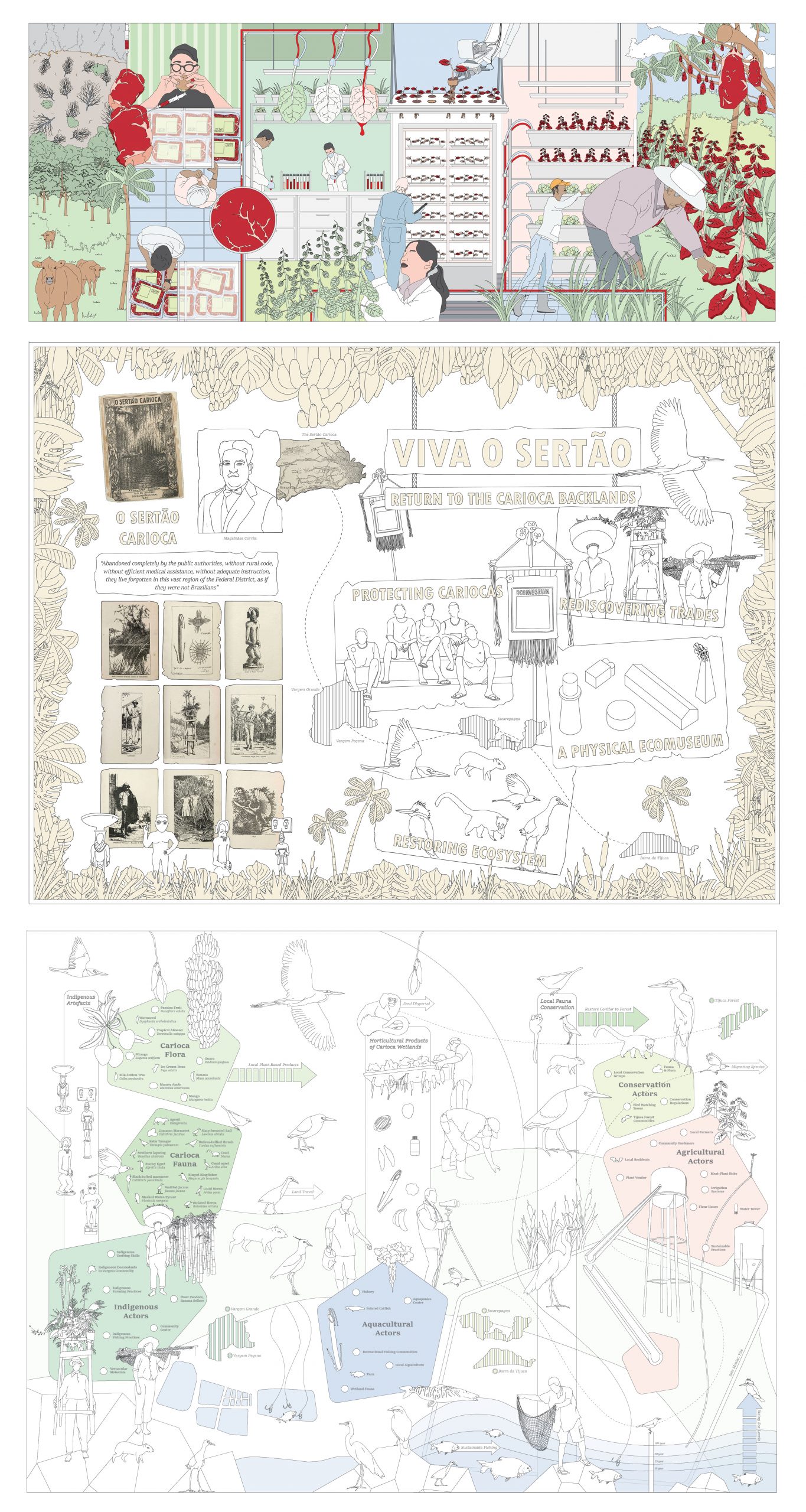 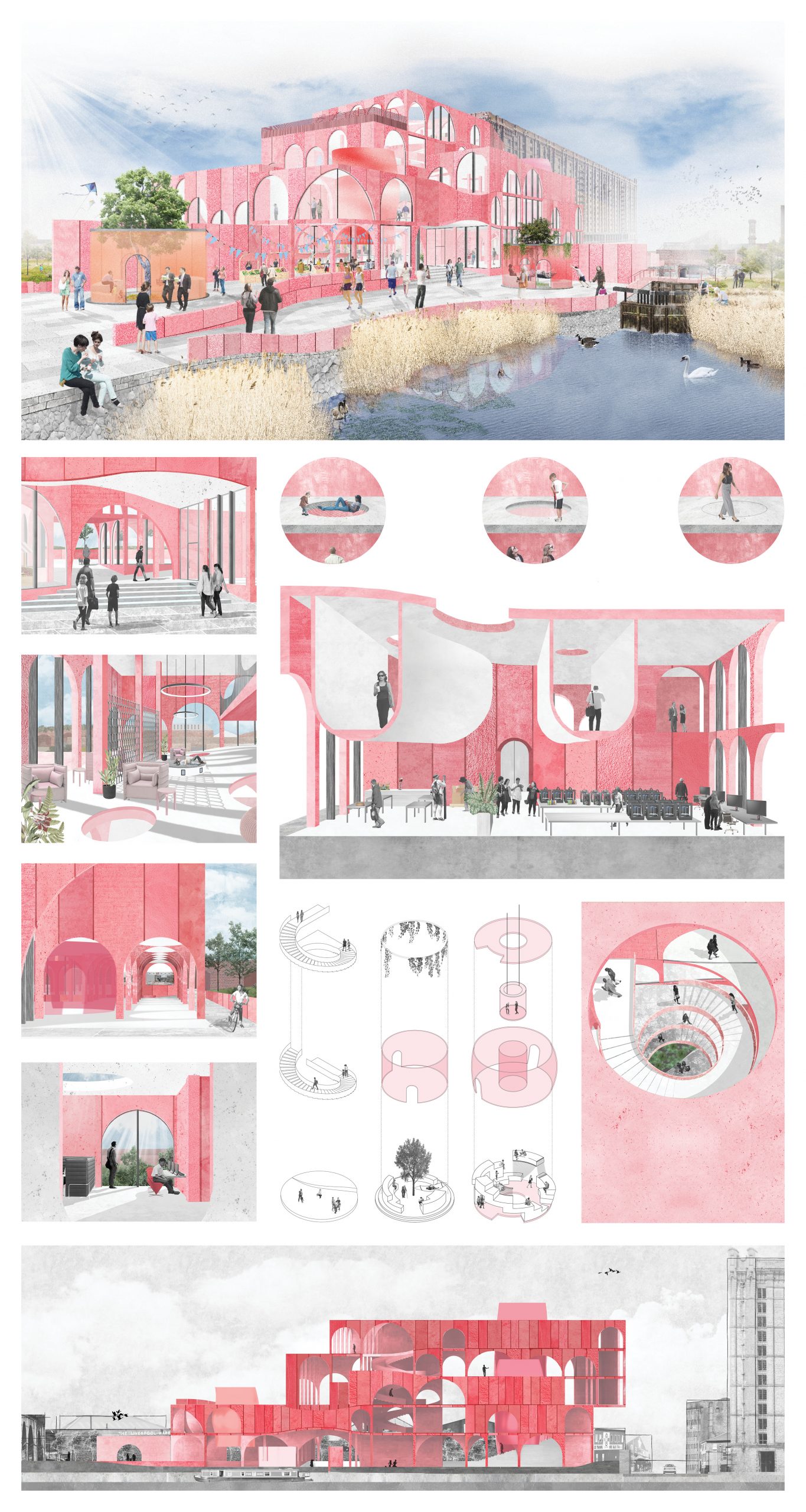 ‘Metamorphising Keystones’ is my response to a brief that prompted us to question the changing role of the library, and design one within the urban context of Liverpool. This project combines the evoloution of the library with the evoloution of the keystones. Initially inspired by the arches on site, I investigated the dual role of an arch as a bridge and a barrier. This led to highlighting the symbolism of keystones, their obsolescence in modern architecture, and how they might be abstracted to connect people in both a human and physical sense.

A metamorphosed keystone then is defined by its ability to connect people, to empower “connection” rather than “collection”. Within the building, the keystone physically connects but also establishes social bonds and human connection. Within the site, my library is a keystone, a place of connection, information. And within the urban context of Liverpool, my site becomes a keystone, the ‘final missing piece’ in an educational network. 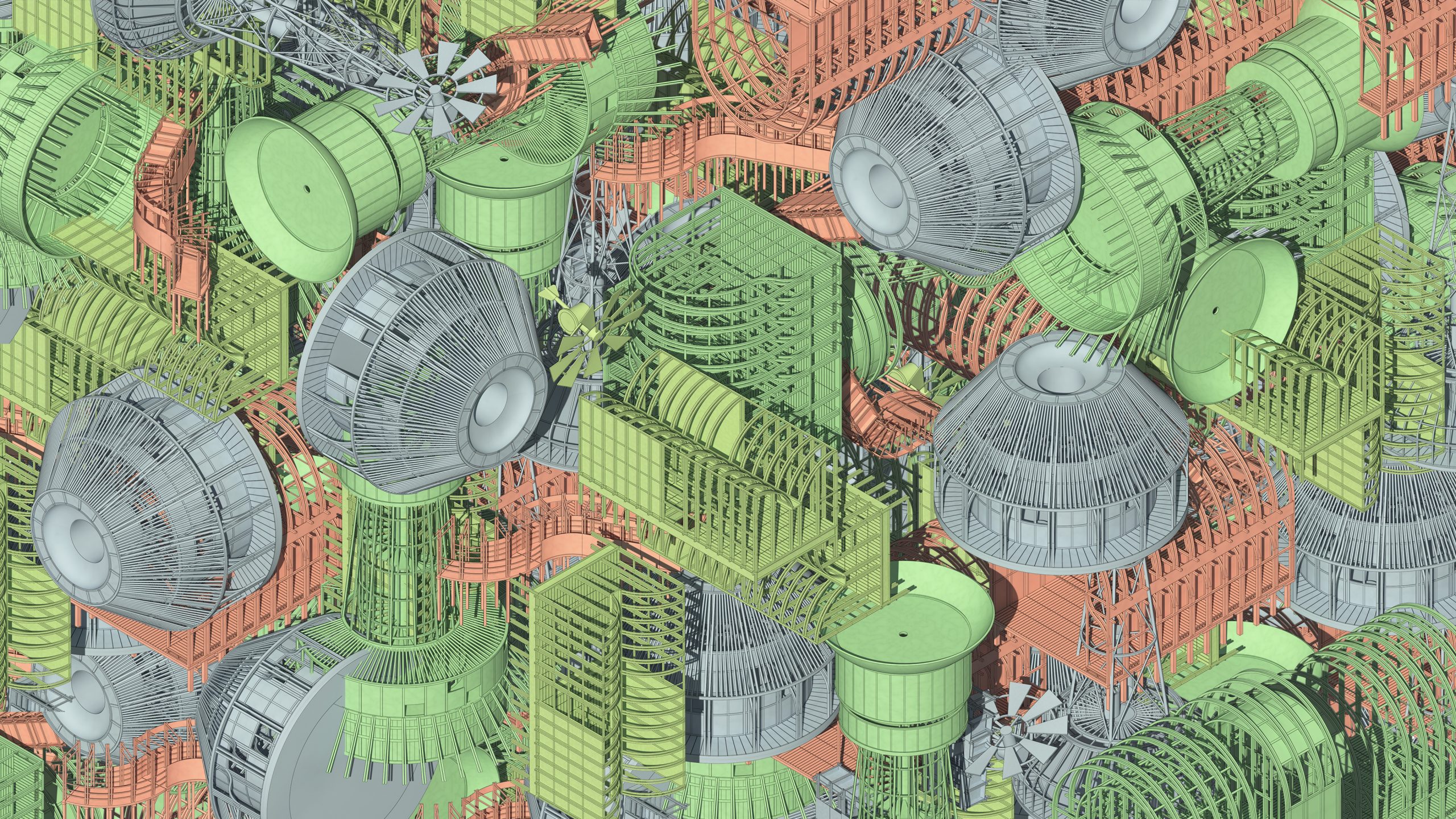 My architectural interests lie in the role architecture can play in reshaping society; being critical of the role of the architect and imaging the built environment as a social actor

At Loughborough, I have won awards for 'Best Narrative', 'Best Digital Visualisation' and 'Outstanding Student Performance'. I have also been nominated for the RIBA president's medal.

I completed my industrial placement during my third year, working for 12 months as an architectural assistant at Aukkett Swanke. Much of my time in practice was spent on projects pertaining to Aukkett Swanke’s research into mixed-use schemes, which combine industrial and residential architecture within urban environments.