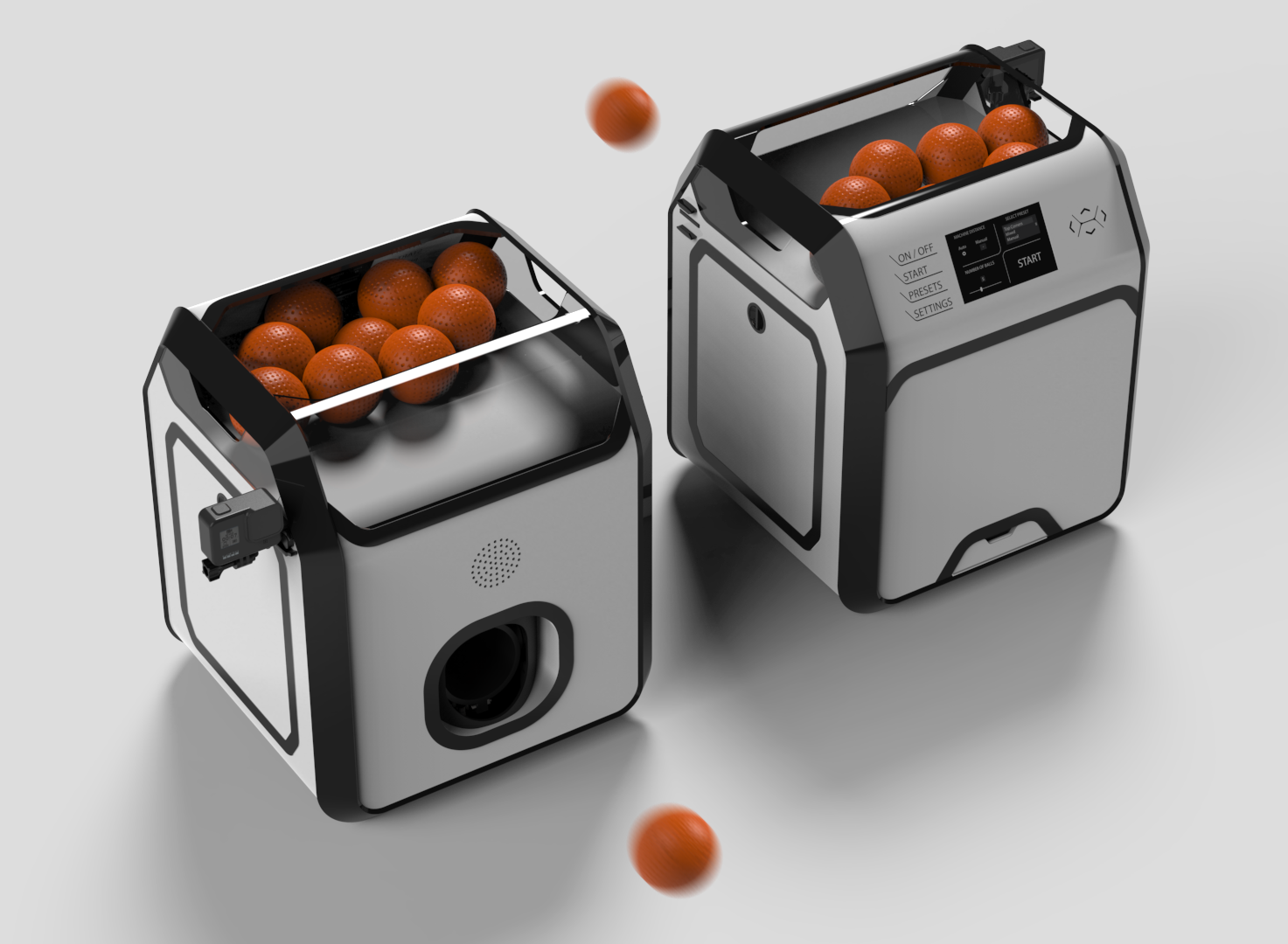 This launcher is a solo training aid for hockey goalkeepers and is a material upgrade on existing ball launchers that are unwieldy and require a second person to operate. As a goalie myself, I have experienced first-hand how goalies’ training takes a distant second place to that of outfield players, and my design is intended to give goalies more control of their own training.

My Smart Launcher can be placed anywhere in the D and will detect where the goal is. Internal sensors then calculate the movement required to produce the user-specified shot type. The smart element comes from the interface, which allows complete customization of the training program according to the goalie’s training plan. 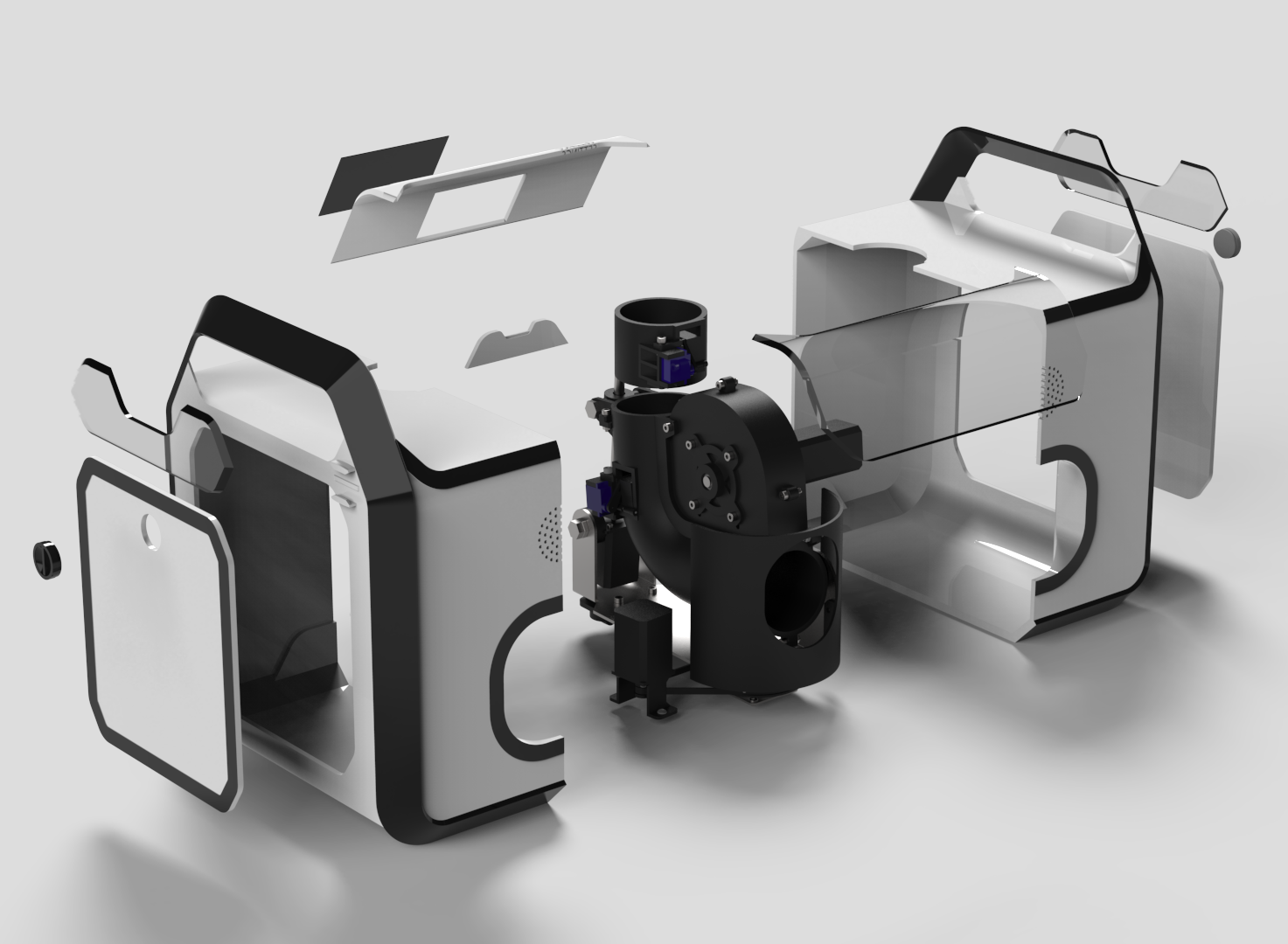 This view shows how the form comes together to house the internal firing mechanism.

The mechanism consists of a large DC motor that drives the flywheel which makes contact with the balls to launch them towards the goal. The flywheel can spin at up to 4000 rpm and can produce ball speeds of up to 90kmph, to give a goalie realistic shot-stopping practice.

Two stepper motors control the angling of the firing tube and together they can produce any angle required from the firing assembly to target anywhere in the goal.

A series of latches powered by servos control the actual release of the hockey balls. 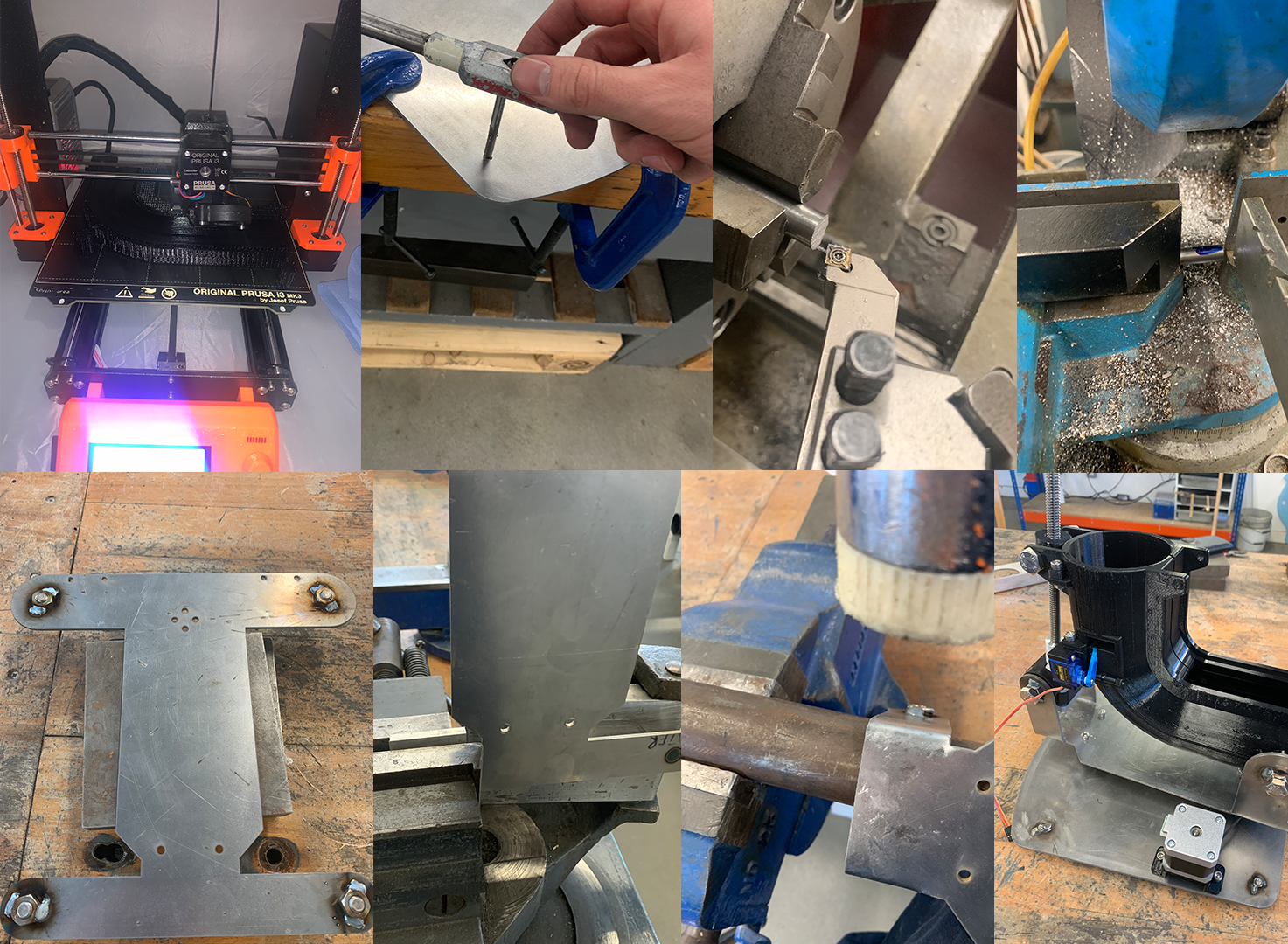 These photos show the various stages of manufacture for producing the prototype. The manufacturing approach was to 3D print as many of the parts as possible, which required designing parts that were optimised for 3D printing.

Parts that were either too large for 3D printing or required more strength than could be offered by the process were fabricated from metal. Other processes used include: Milling, Turning, Water Jet Cutting and Sheet metal bending. 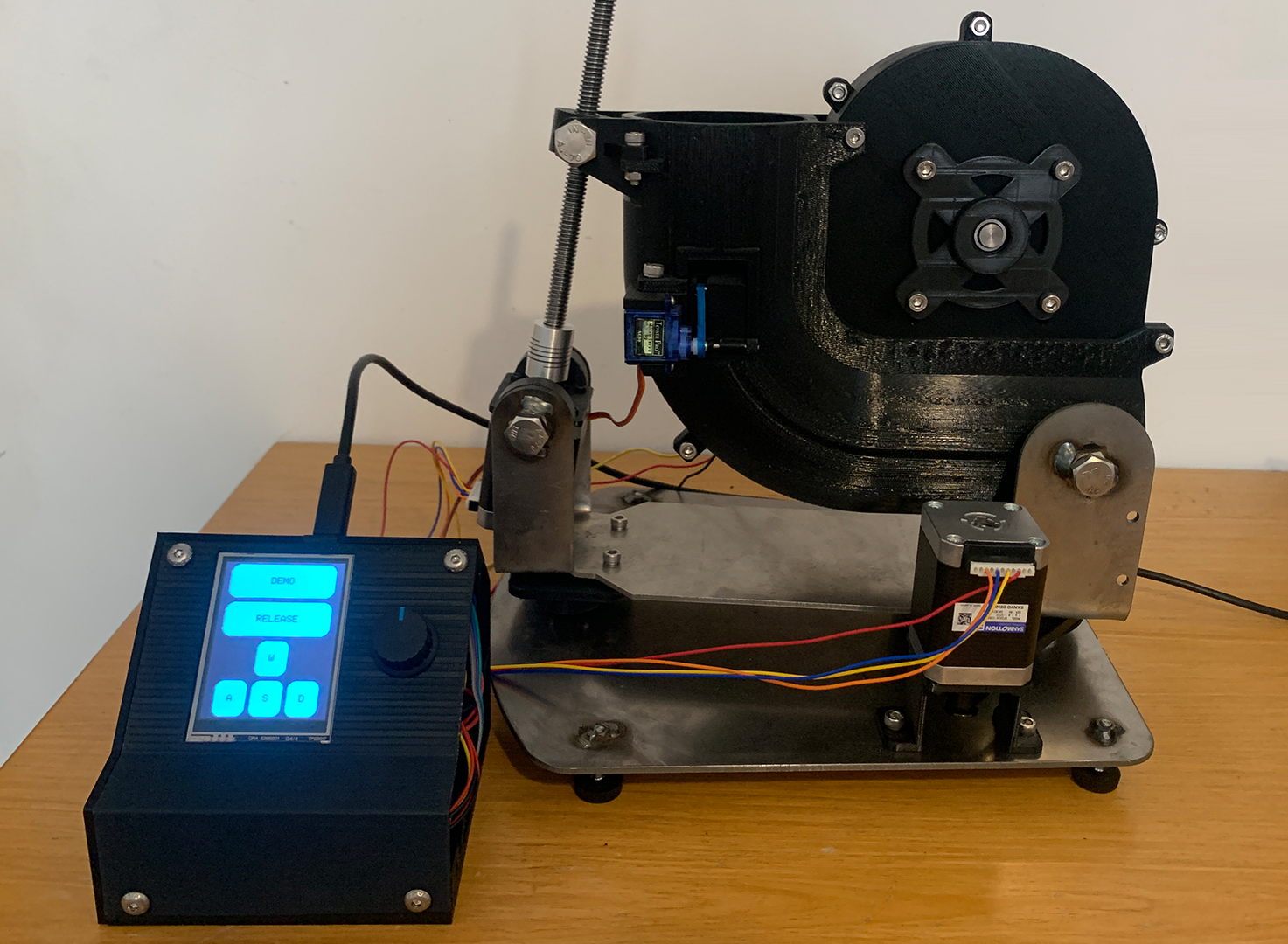 This is the finished prototype. The prototype is powered by an Arduino that all the components interfaced with. The two stepper motors and the DC motor are powered at 24V, which are powered from the mains for the purpose of this prototype - the final product would be powered by rechargeable batteries for portability.

A touch screen display is used as the input device for controlling this machine. It has been programmed to run a demonstration program at the press of the "Demo" button. The ball release latch is controlled by another button. There are also arrow keys for manual adjustment of the machine. The dial is connected to a potentiometer that controls the speed of the flywheel. This offers complete and easy control of the prototype for testing purposes. 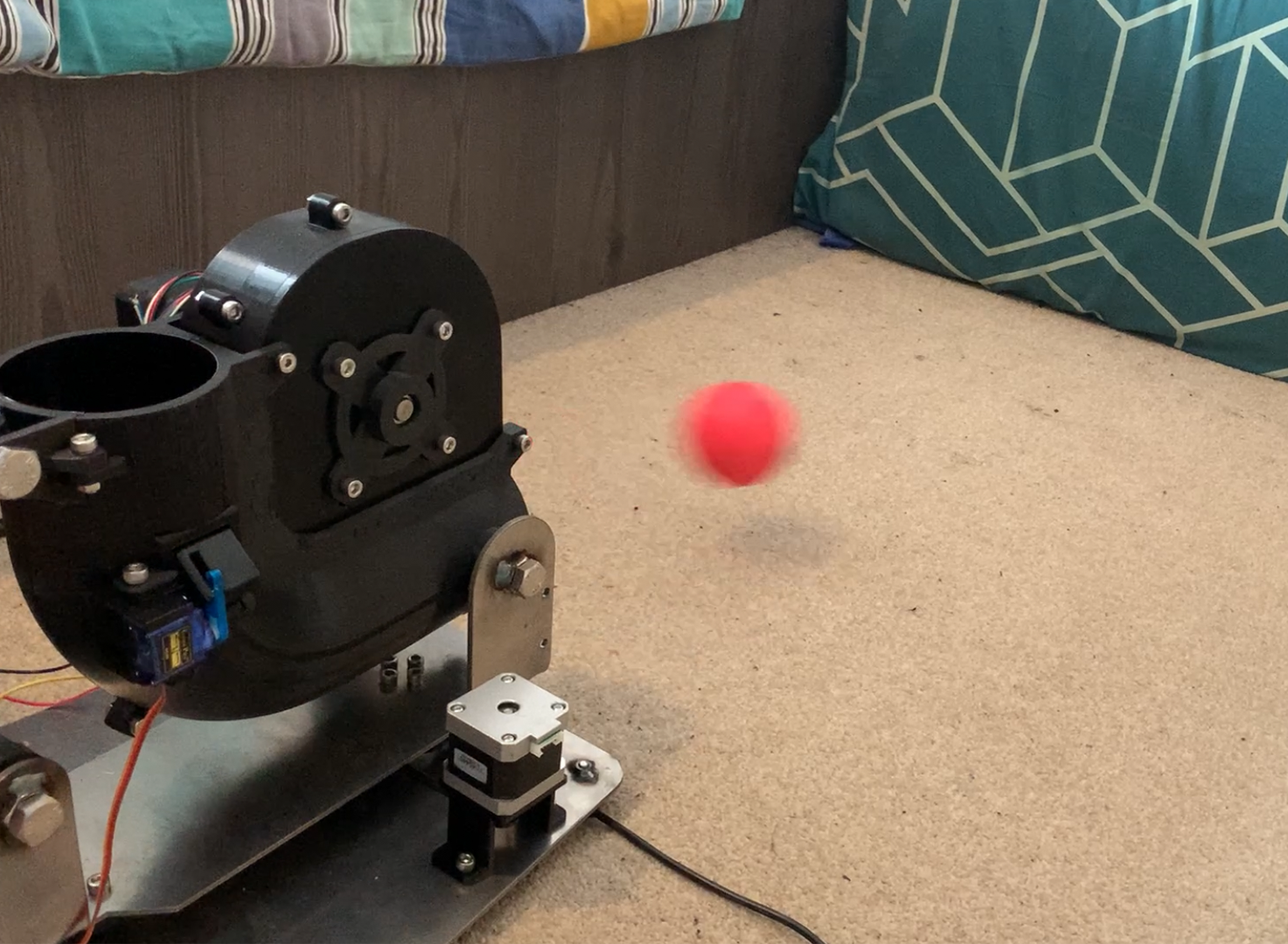 The finished prototype was thoroughly tested to demonstrate the working of the product.

The first area tested was the movement of the machine and the limited torque of the stepper motors was optimised by increasing gearing ratios and reducing motor speed.

The other area tested was the ball firing mechanism. The speed of the DC motor was gradually increased through testing as confidence in the prototype grew. Alongside this, the height of the wheel was adjusted to increase or decrease ball contact. The difficultly was finding the 'sweet spot' for the right amount of contact, too much and the ball would get stuck in the firing tube, too little and the ball would not come out at speed.

The end result was a ball launcher that could be directed side-to-side and up and down with varying ball speeds to give the goalie a comprehensive workout. 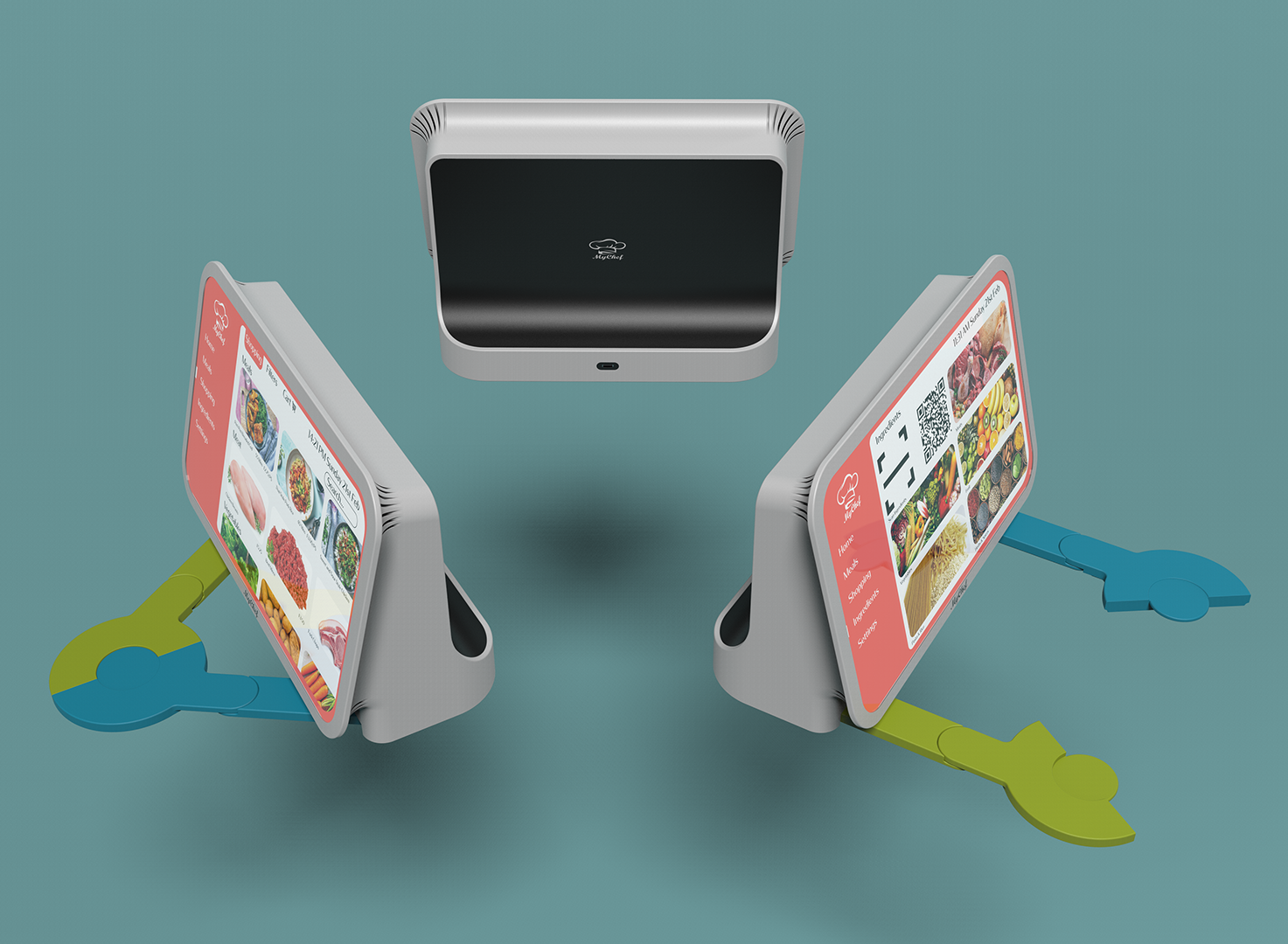 This product was produced as part of the live project’s week, in response to a Wellbeing brief set by Cambridge Consultants. MyChef helps create healthy meals made with everyday ingredients that anyone can cook. The weighing arms aid in food preparation and portion control. The screen element acts as a kitchen hub. It keeps track of what ingredients are available in the house, suggests healthy meal ideas using available ingredients, then through an interactive recipe will help you cook the meal. 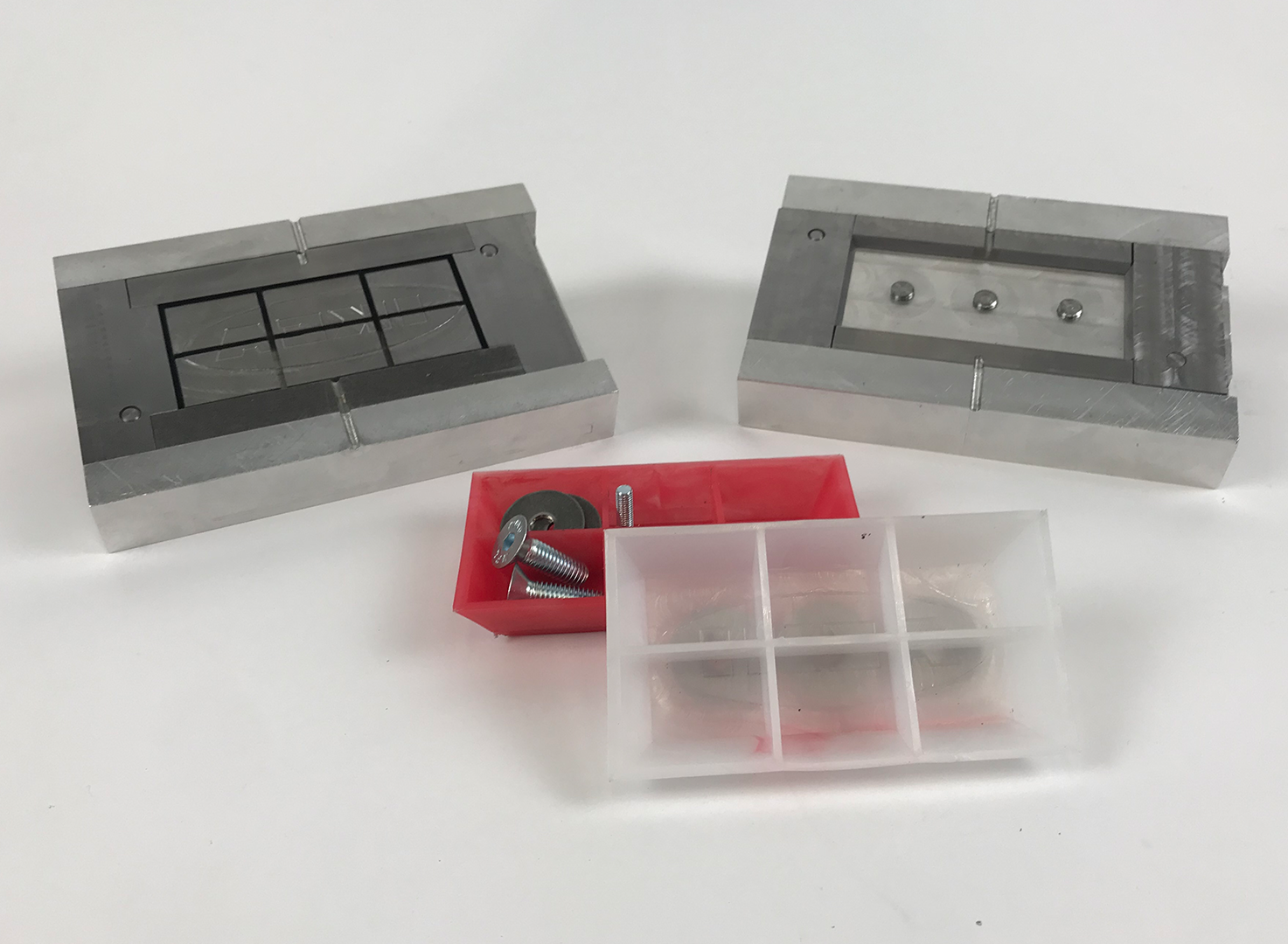 This was a design for an injection moulding project. The brief was to design a promotional widget for a company to give away, then design a mould that would be used to produce this widget. The widget I designed was a magnetic parts tray for Ikea flatpack furniture. An injection mould was designed, then engineering drawings produced, and then the mould was manufactured. One of the biggest takeaways from this project was the importance of manufacturing tolerance when injection moulding.

I love to use my creative flair, design skills and technical capabilities to solve problems and meet a project brief from conception to reality - to design and make, with form and substance.

My passion for product design means that I am always trying new things, challenging myself to experiment and teach myself new skills. In early 2019 I built my own 3D printer from a kit to help me to learn both how the printer works and to be able to develop my 3D printing skills. I fell in love with everything about 3D printing - I have experimented with new materials, mods and design methods. I have designed and printed everything from figurines to design prototypes to PPE for hospitals during the Covid Pandemic. This has given me great insights into how to optimise a design for 3D printing.

Through my years at Loughborough, I have completed countless projects and have learned that my true passion lies in designing for manufacture. The constraints of manufacture help to shape the project, helping to balance out any necessary compromises between substance and form in order to produce an aesthetically pleasing and highly functional product.

Bristan is a British kitchen and bathroom specialist with a mission to be 'brilliantly better, brilliantly simple' in everything they do. I had a one-year placement in the Bristan Design Team and my focus was on the mechanism design of taps, both form and function.

I enjoyed the role and responsibilities of being a Product Design Engineer, working on the end-to-end design process from ideation to design to manufacturing of my prototype. I had to learn new CAD software from scratch, and was comfortably proficient within a week, demonstrating my adaptability and capability to learn new software and design skills quickly and effectively. Over the course of the year, I took great pleasure in marrying my mechanical skills to use with my eye for simple clean lines, with a brief to produce the best product function and user experience possible.

My experience reaffirmed my passion for design and my ambition to work in a progressive company to help them design and manufacture exciting, innovative and highly functional new products.